While some residents of the territory are gearing up to commemorate the centennial Transfer Day, at least one St. Croix woman is old enough to remember it.
Rupertine Gardier turned 107 years old Thursday, and while she was not available to comment on it Friday, her daughter Cynthia Christian said a celebration of her longevity — and that of other centenarians, or those older than 100 — will be held on Thursday at Government House on St. Croix from 6 to 8 p.m.
http://dominicanewsonline.com/news/homepage/news/human-interest/rupertine-gardier-105-not-out/ 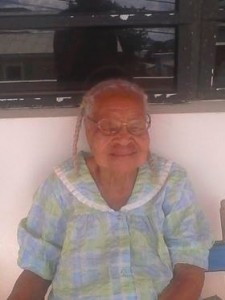 Gardier is now 105 years old
In a world where the average person lives for probably half a century, Rupertine Gardier, can boast of living a full century and more.
Recently she celebrated her 105th birthday.
The Colihaut resident who presently lives in St Croix in the United States Virgin Islands (USVI) attributed her longevity to proper dieting and faith in God.
She said reaching 105 years is a tremendous blessing.
As part of her birthday celebration a Priest and nuns visited her home in St Croix where they prayed with her.
Gardier, a devoted Catholic, was described as someone who enjoys attending church, avoids problems with others and does not mind other people’s business.
She was also described as someone with a good sense of humor and enjoy giving jokes and who receives communion every week.
The centenarian said she will continue to hold on strong until God is ready for her.
Gardier was born on March 23rd 1910 and according to her great granddaughter, Presanda Christian, at the age of 14, she was sent to live with her aunt in Roseau.
“She later became a domestic worker and gave birth to four children, two girls and two boys,” Christian told DNO.
In 1952, at the age of 40, Garnier went to live in St Kitts where she was employed as a domestic worker.
“In 1975 she left St Kitts and then went to New York where she stayed for nine months,” Christian said.
She further revealed that following her great grandmother’s stay in New York, she moved to St John in the USVI where she stayed with her daughter for five years.
“She came back to New York in 1981 where she spent ten years and then moved to St Croix with her daughter Cynthia Christian who is the one who takes care of her at present,” Christian said. 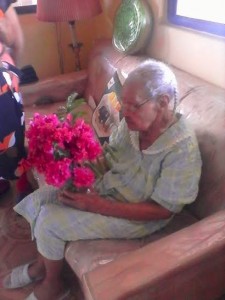 Gardier receives flowers on her birthday